Melvin Twellaar (men’s single european champion): Filippi’s commitment has always been an inspiration to me.

European Champion Melvin Twellaar appears to be as dominant on social media as he is on the water; more than 60 thousand people viewed a viral reel on Filippì’s social media of a “water game” featuring the oars of his (and proudly our) F47 that delivered him to victory at the European Championships in mid-August. On the 1972 Olympic basin in Munich, ahead of Olympic champion Ntouskos and the enfant du Pays, German Oliver Zeidler, Twellaar delivered a “notice to skippers” ahead of the world championships in Racice (Czech Republic) and perhaps even Paris 2024. 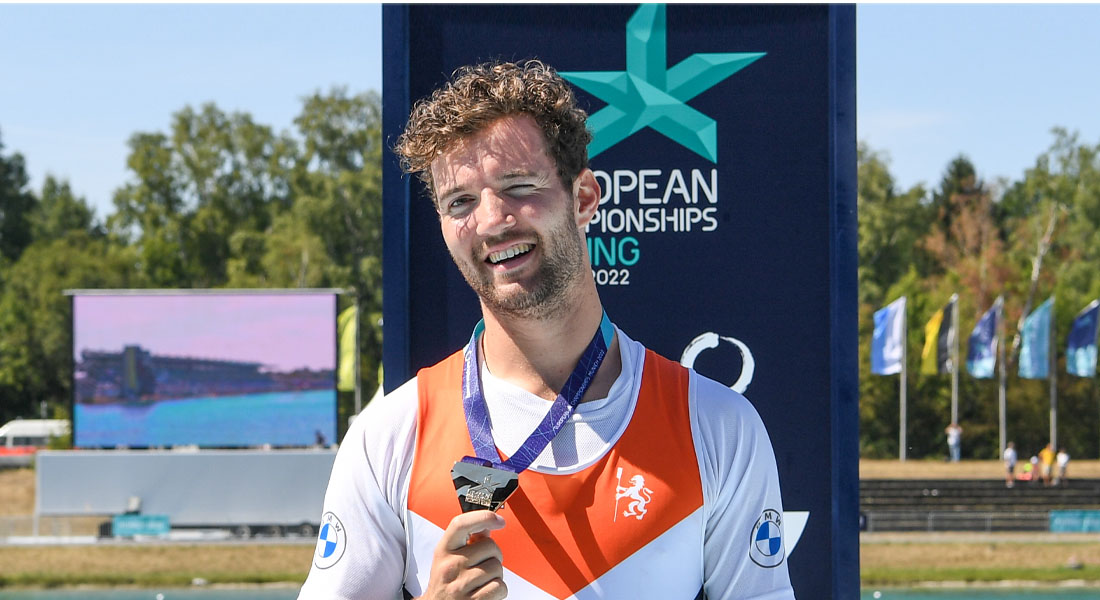 After all, at 25 years old, he has already climbed two of the steps for the Olympic podium in Tokyo after winning silver in the men’s’ double behind the French pairing of Hugo Boucheron and Matthieu Androdias (who also raced in a Filippi). Part of the key to his virtuosity on the water is Twellaar’s pragmatism during everyday training combined with a steadfast belief in his own possibilities regardless of the result.

With just four weeks to go before the 2022 World Championships in the Czech Republic, we put a series of questions to Twellaar as he was ending his altitude training camp in Austria (Obertraun) in the hope that the Dutch sculler-extraordinaire would give us an insight into his remarkable finish in Munich and how he plans to develop from here.

Melvin, we still have goose bumps for your burst in Munich…

Well, I don’t actually remember too much. I saw Zeidler passing Ntouskos, so I went for the final sprint. Only after did I realize that I had passed both. It was a pleasant surprise, but I did always feel confident.

Did you ever think you couldn't do it in the final strokes?

The last strokes were very hard; I even suffered two small crabs, but everyone was very tired and on the limit.

Honestly, after the good results in the World Cup (first and second in Poznan and Belgrade 2022) were you confident you could have your say against the home champion Oliver Zeidler and the Olympic champion Stefanos Ntouskos?

I believed it was possible to beat them, but they are both great athletes. To compete against that caliber of opposition, you need to believe in your own strength. Otherwise, you will never overcome them.

How important was it to row in a Filippi boat in the final race with the thrust of the latest generation Aliante carbon backwing riggers?

The Filippi skiff is a great boat and I'm feeling very comfortable and confident with the new Aliante; it's stiff but also able to make the row smooth. I'm also very happy to row in a Filippi because you feel part of a Filippi family, thanks to the great service and the genuine support they give you during the competition.

How much did the race strategy set with your coach Francesco Fossi affect the final victory?

The evening before the race we had a small talk to analyze the previous races and make the best plan for the following day. Every race was better than the race before, so I just had to compete and enjoy the adrenaline.

How did you come up with the choice of a F47 Filippi - or the Filippi brand in general? Have you ever tried other models?

Last year I was rowing in an F22. This winter I gained some weight, so we had contact with Filippi that advised us to try an F47. From the beginning it felt very good and even though I tried a lot of Filippi models that was my choice. I think it's very good that there are a lot of models with different characteristics, so you have always the right configuration.

Was it more exciting to win the single at the Europeans or the silver medal with your friend Stefan Broenink at the Tokyo Olympics?

They are both really special, and they are not comparable. In Tokyo, it was very special to share the work and the happiness together with Steff and in Munich it was really special the explosion of happiness all around me and the fact that my parents were there to be part of this amazing day for me.

Appetite comes with eating. We assume you are working hard for the World Championships with your coach Francesco Fossi and under the guidance of the Head Coach Eelco Meenhorst?

Directly after the Europeans we went to altitude camp to prepare in the best way for the most important race of the year. I'm still very hungry and this positive result motivates me even more because I know that the other guys are now working even harder for it.

What is your home club, and would you like to thank some of the coaches for the recently results who helped you grow as an athlete?

I stared rowing as a junior at the Hunze in Groningen. After I started studying, I changed to a student club named GSR Aegir. There are a lot of people I want to thank, but in special Jannes Munneke and Feico Camphuis; my student and junior club coaches who both always believed in me.

What does it mean to have a young, non-Dutch coach with a huge past in the Olympics and World Championships (bronze and silver in the senior men's doubles in 2013 and 2014 with Romano Battisti)?

I remember Fossi racing at the WC in Amsterdam in the double. That was a cool race. It's also really special that we both raced in the double. For me, it's very nice to have some fun during the training too; Fossi is the right person for that. We also have a good time outside of training too!

What details should Filippi consider to improve our boats?

Maybe the possibility to personalize your boat even more with custom painting.

Have you tried the new MAS 20 shoe? If so, did you appreciate its comfort, lightness and design?

Yes, it's very nice that your foot is very connected to the footplate, especially in the top of your shoe. I like them.

Do you perceive Filippi as a highly innovative company and continuously looking for the best solution to share with athletes?

It's inspiring that Filippi is always trying to innovate according to the feedback that top athletes give to them. As we are searching for perfection every time, it's great to see a boat-building brand is busy doing the same.

Where does the all-Dutch tradition of plunging into water after an important team victory come from?

It comes from the varsity (a traditional Dutch race in a coxed four filled with only members from your club). When your club wins, all club members jump into the water to celebrate. Actually, the tradition is to do it naked with a tie of your club. But for international races, we make an exception on the dress code.

The hug with your parents after the award ceremony is an image that went viral. How important were they in achieving your goals?

The support of my parents is fundamental for me because it does not matter for them what the result is but the fact that I'm happy and working hard for my dreams. They always support me and I was grateful to have them there at the finish line

Who are the favorites for the men's singles world championship in Racice?

Every race is different. We will see in Racice who will be fit and with the right mindset. I'll be fighting.

Will you keep on rowing the single until Paris 2024?

We will see what the future will bring. I'm happy in the single for now. It's a great challenge.

Where do you see coastal rowing in the near future and what is your idea to promote rowing on water and in the media?

The Dutch federation is busy promoting costal rowing in the country. Personally, I haven’t tried it yet but I think it's a funny way to do rowing. I will definitely try it.

Francesco Fossi, who is married to Claudia Belderbos (a former Dutch international who won bronze medals at the 2009 World Championships and 2012 Olympics alongside a fourth place in 2016 at the Rio Olympics and two silver medals at the European championships in 2015 and 2016) has two children; Sofia is 5 years old and Julian 2. Mr Fossi – who is the coach of new European champion Melvin Twellaar - joined the staff of the Dutch national team last October and personally looks after the men‘s single, men’s four and quad. Francesco got a silver and a bronze with the Italian national team at the world championships in the men’s double alongside Romano Battisti. A year after the end of his athletic career, he started training at the university club of Amsterdam (Nereus), before becoming men’s head coach at the Laga club in Delft. In those 3 years he coached two Under 23 crews for the Dutch Federation at European and World Championships.

Francesco, how Melvin looks like you as a rower?

He likes to have fun, but keeping focus on giving his best.